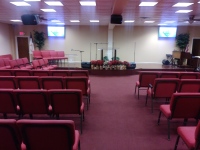 Our Vision:  To empower the People of God through Preaching and Teaching the Holy Word, encouraging them to live a Holy and Sanctified life.  We pledge to be a light to those who are lost and without hope of eternal life.  We will challenge the uncommitted to recommit themselves to the Will of God for their lives.

Our Pledge: We pledge to be a Light to those who are lost and without hope of eternal life.

Our Motto:  Rescuing the Perishing.

him if he would take up the mantle and Pastor a church that was in need of leadership.

Church of God In Christ by Bishop Eleazar Lenox. Then after his installation the name was changed and was

renamed as New Mission Temple Church of God In Christ.

Elder Purkett Sr.'s pastoral leadership began in the basement of a house at 1610 South St. Louis Street with only six

Pastor Purkett began his ministry through outreach and missions with goal in drawing more souls to Christ. He was a

Perishing". He also encouraged his congregation with anointed preaching, uplifting song, and dedicated fasting and prayer.

On August 8th, 2009 Supt. Herbert Purkett Sr. traded in his labor's for reward. During the churches' 39th Church

continue the work at New Mission Temple Church of God In Christ.